Local climber Murdo Jamieson has had a productive summer whilst fighting his affliction with FOMO (Fear Of Missing Out). In the spring he and Iain Small managed the first ascent of an amazing looking line on the equally stunning Carnmore crag up here in North West Scotland.

We wanted to hear more about this ascent and Murdo was happy to give us the low down. 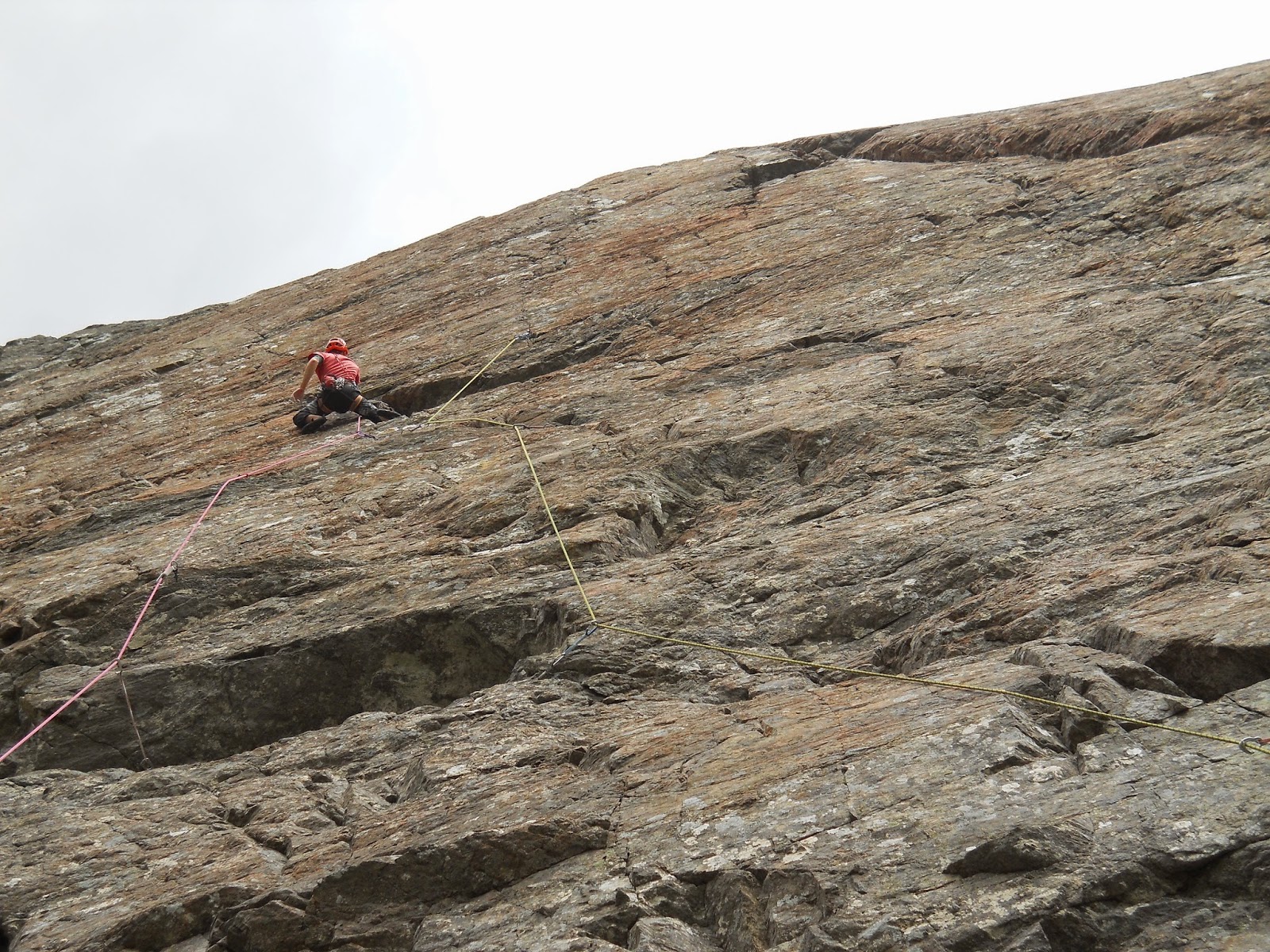 Being strong minded for once, I declined a few invites out to Pabbay and Mingulay this year.  Time marched on and the departure of these trips became closer.  Due to the power of social media, I became well aware that everyone seemed to be going out this year.  Instantly my FOMO kicked in.  Anyway, who would want to go to an island that had big overhanging cliffs, sound rock, stunning lines and all that.
Thankfully my good friend Iain Small wasn't going either.  The good thing about Iain is, he doesn't get FOMO.  He just gives it.  Anyway, on the Friday morning of one of the trips I had declined, I found myself lathered in sweat, cursing and swearing as I cycled on a bike too small for me with a big heavy rucksack on my back into Carnmore.  I was with Iain but he appeared to be enjoying the scenery and was always ahead.  Mountain biking is shit I thought.   Maybe getting the boat out to the islands would have been better.  Slight FOMO alarm bells were ringing in the distance. 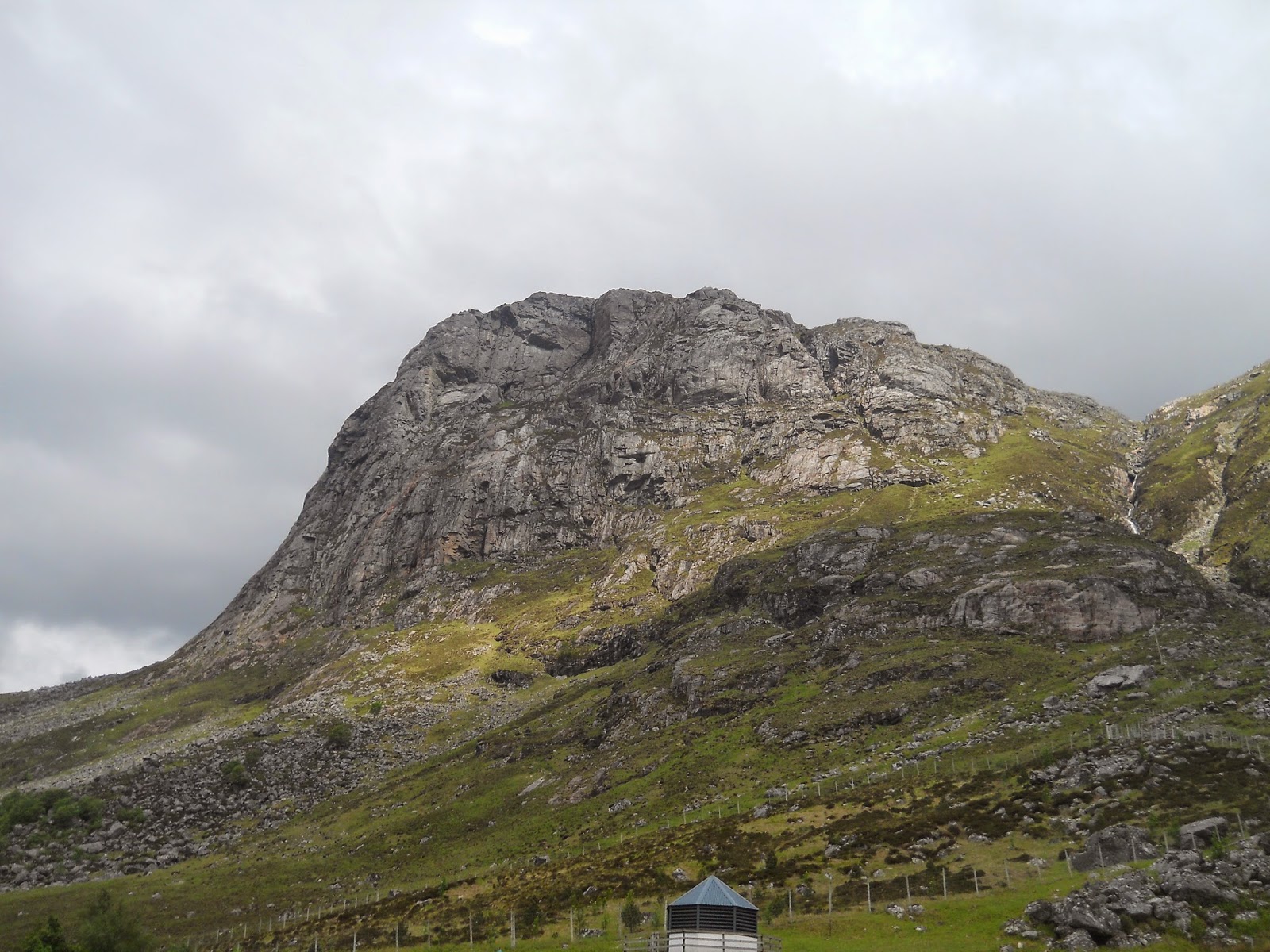 It had been years since I had been to Carnmore so I was pretty psyched to just do the classic harder routes.  We arrived at the 5 star shit hole (the barn), had a quick bite to eat, rehydrated then marched to the top of the crag.  We did the 'Orange Bow' and 'Wilderness' which were very good.  After the routes were done, it was like 9.30pm or something so I was all set to have my dinner and a brew.  Iain, wasn't.  He asked me if it was cool if he rapped to check a potential new line out.  So whilst he was doing that, I was busy trying to keep warm by doing star jumps, push ups and generally running around trying not to fall over the edge of the crag as a bitter wind was blowing over. 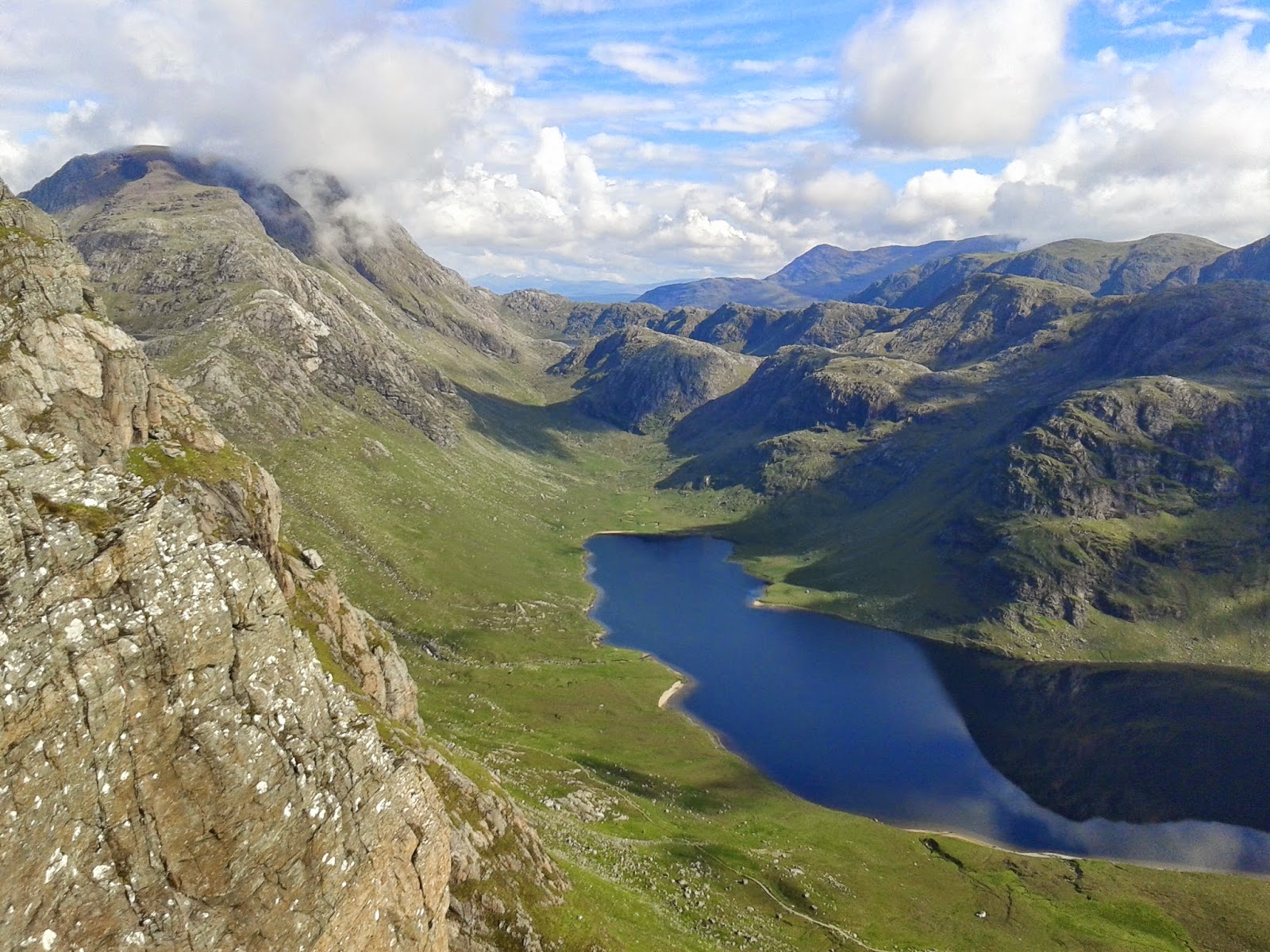 This is turning into a long story, so I'll speed it up.  Saturday morning. Iain tried his new line, fell off a few times.  Almost killed me by knocking a foot hold off that cracked my helmet open.  He retreated.  We did 'Death Wolf' which is pretty good value by the way.  Not a pushover by any means.  We cycled out, I was raging.  Fell off my bike a few times.  Even more rage.  Glad to get back to the car, I was pleased to know that I had no reason to go back any time soon.  Little did I know I was going to repeat the feat and do the exact same cycle again in a few day’s time! 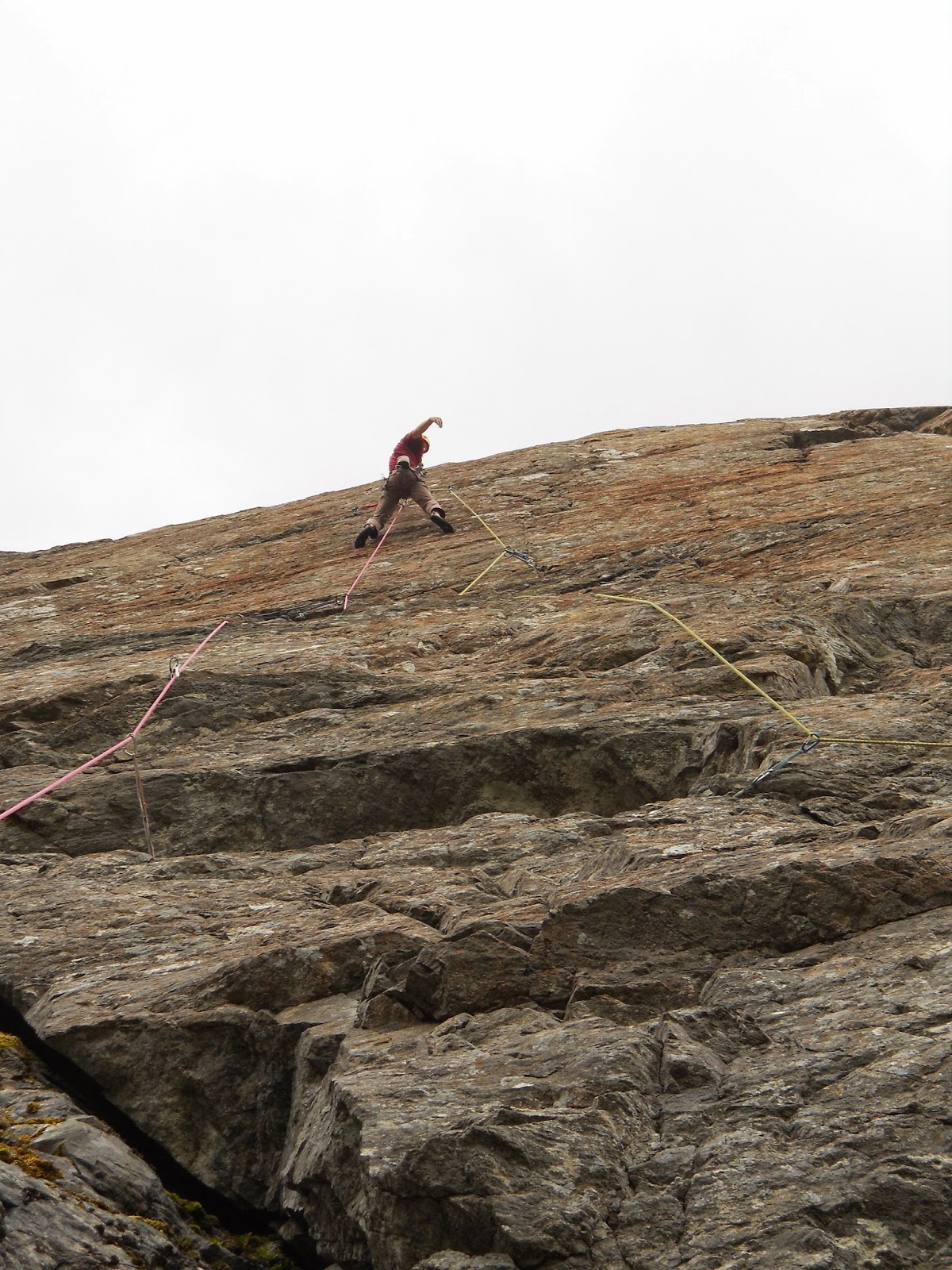 By Monday morning I had recovered and my mental scars had healed over.  Already my rat was hungry again.  I was meant to be shadowing a potential employer on Skye by doing some hillwalking on the Cuillin Ridge the following weekend.  Great I thought.  A day or two later, I realised the weather was going to be nice again in the North West.  Since cycling out, I harbored a deep psyche to get back to Carnmore and try this new line with Iain.  So after some lame excuses to this employer, I was straight on the phone to Iain making plans to get back to Carnmore. 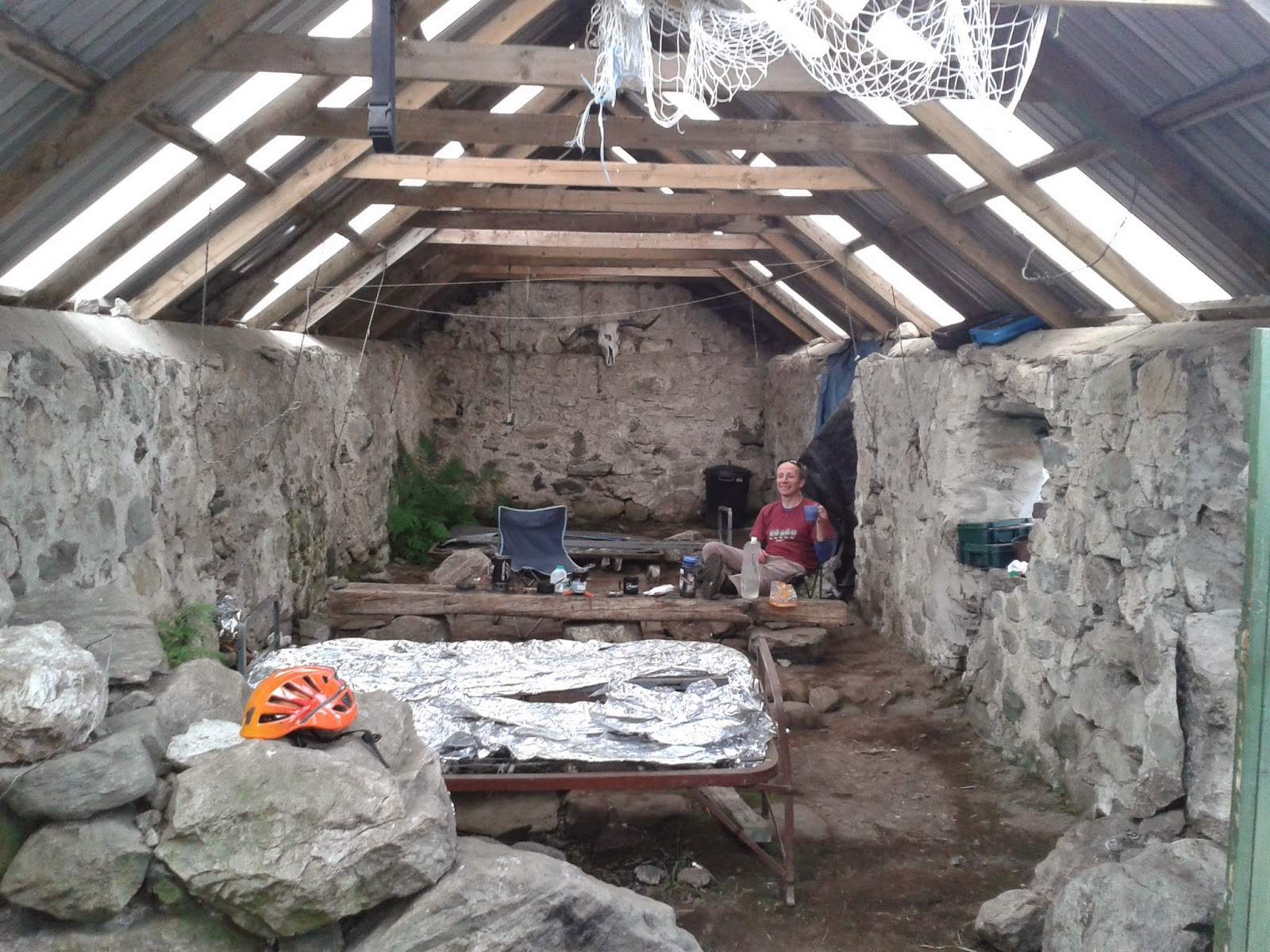 Same process as above.  Cycled in on the Friday. Rage.  This time it was damp, overcast and midge.  The forecast was for it to clear by mid-afternoon.  To be fair, it did so I can’t complain.  We lugged the stuff up the hill and almost died in the heat and humidity.  Iain rapped the line again and had a play on a top rope.  I had a chance after to rap it and try the moves.  Ah, this is pretty hard!  Instantly I felt a bit demoralised.  I didn't realise how hard it was.  Small crimps, far apart, poor feet.  Even after the crux there's another pretty hard sequence.  Hmm, have I wasted my time?  I'll never lead that.  But Iain reminded me that the crag was in the baking sun, I was dehydrated and tired from the cycle.  Anyway, after my mackerel and cous cous dinner at our free apartment, I lay in bed running over the moves.  Ach maybe its not so hard.
What a difference a day makes.  Iain rapped it and top roped it cleanly first go.  I rapped it, top roped it first go as well.  Shit! Its on!  Hmm, the crux is very runout with massive fall potential, I better not think about it too much.  So, Iain racked up.  We got down there, I sorted the ropes.  Iain set off up the wall.  He arrived at the niche and invested some time into making sure the nest of kit was solid.  He gave his cue and was off. I stood up, then suddenly the fear came over me.  I have never been so stressed belaying.  He launched up the wall making some grunts with a final power grunt to get into the big break.  Thread clipped, cams in, he only had the upper wall to do which could easily spit you off.  He dispatched it in good style then rapped it to get the kit out and handed it over to me. 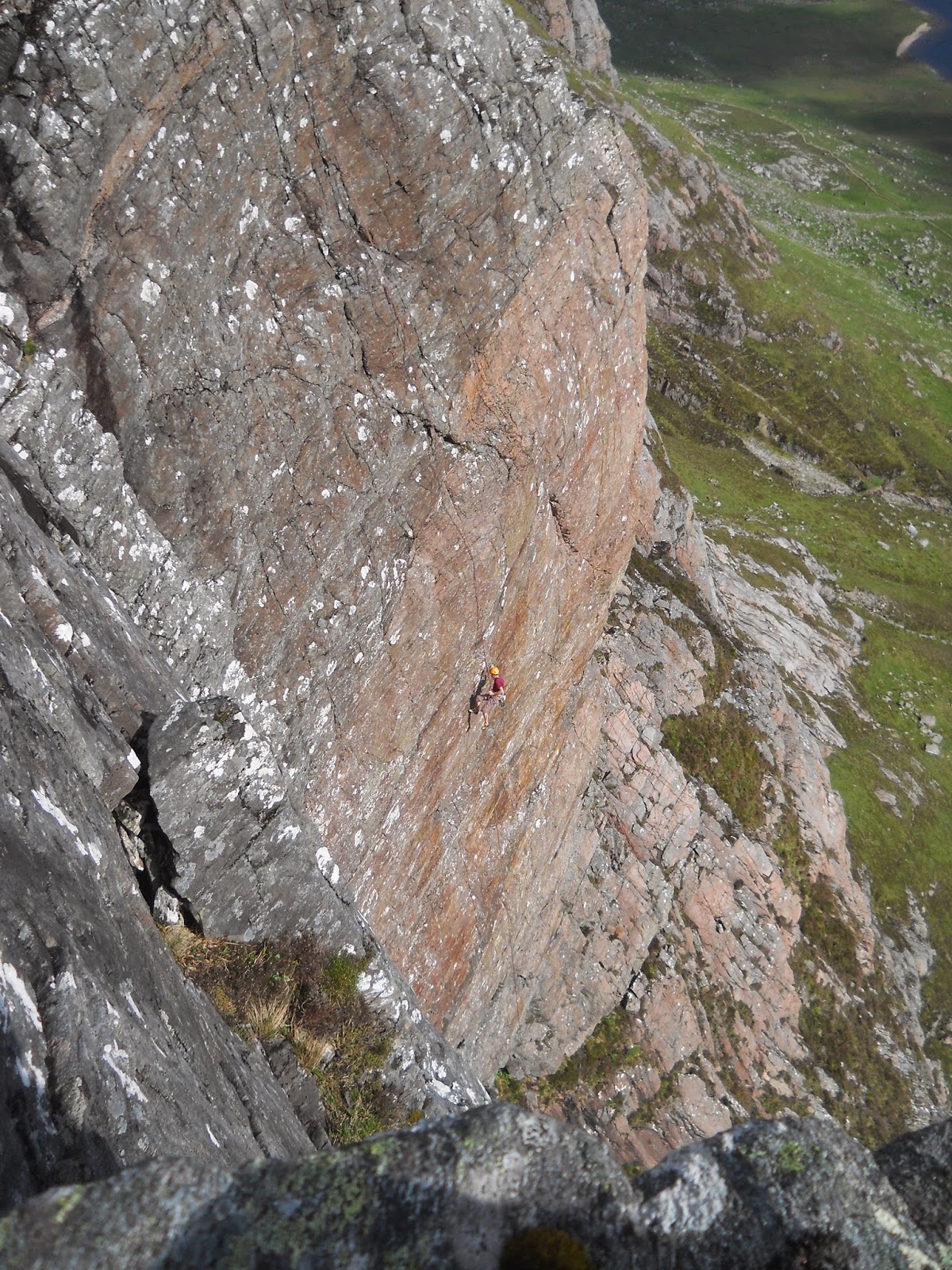 My turn.  Kit sorted, ropes flaked, I started off up.  First runner in, I need a shit.  FFS!  So I down climbed then found a spot in the vertical vegetation below the belay.  Right, t-shirt tucked in, trousers rolled up, rock shoes cleaned, now I look the part.  I arrived at the niche and repeated the same process Iain went through in equalising everything.  Bombproof.  Shaking out, psyching myself up.  When is the right time to go?  I don't know so I went for it. Before I knew it I was at the big break clipping the thread. I looked down at the ropes waving between me and the last runners in the niche.  You would have gone miles if you blew the stab into the break!   Hanging out, shaking out, I absorbed my surroundings.  Lochs, sea, mountains, sun, cloud, breeze...perfection.  However, I still have the tricky wall above.  I got that over with too and rocked onto the upper slab just below the top.  What felt like HVS in the morning on a top rope turned into what felt like E2 on the lead!  Topping out and being welcomed by A' Mhaighdean is a moment I will never forget.
I rapped it and shook Iain's hand.  We finished the day off with Fian Grooves, or the first 2 pitches at least.  I was meant to do the top 5c pitch but somehow managed to find myself scrambling up the top of Fionn Buttress.  Oh, what a shame.   You know whats coming now, the cycle out.  But this time in the pissing rain.  I don't care, I've have just climbed the best route I'll ever do in my life! 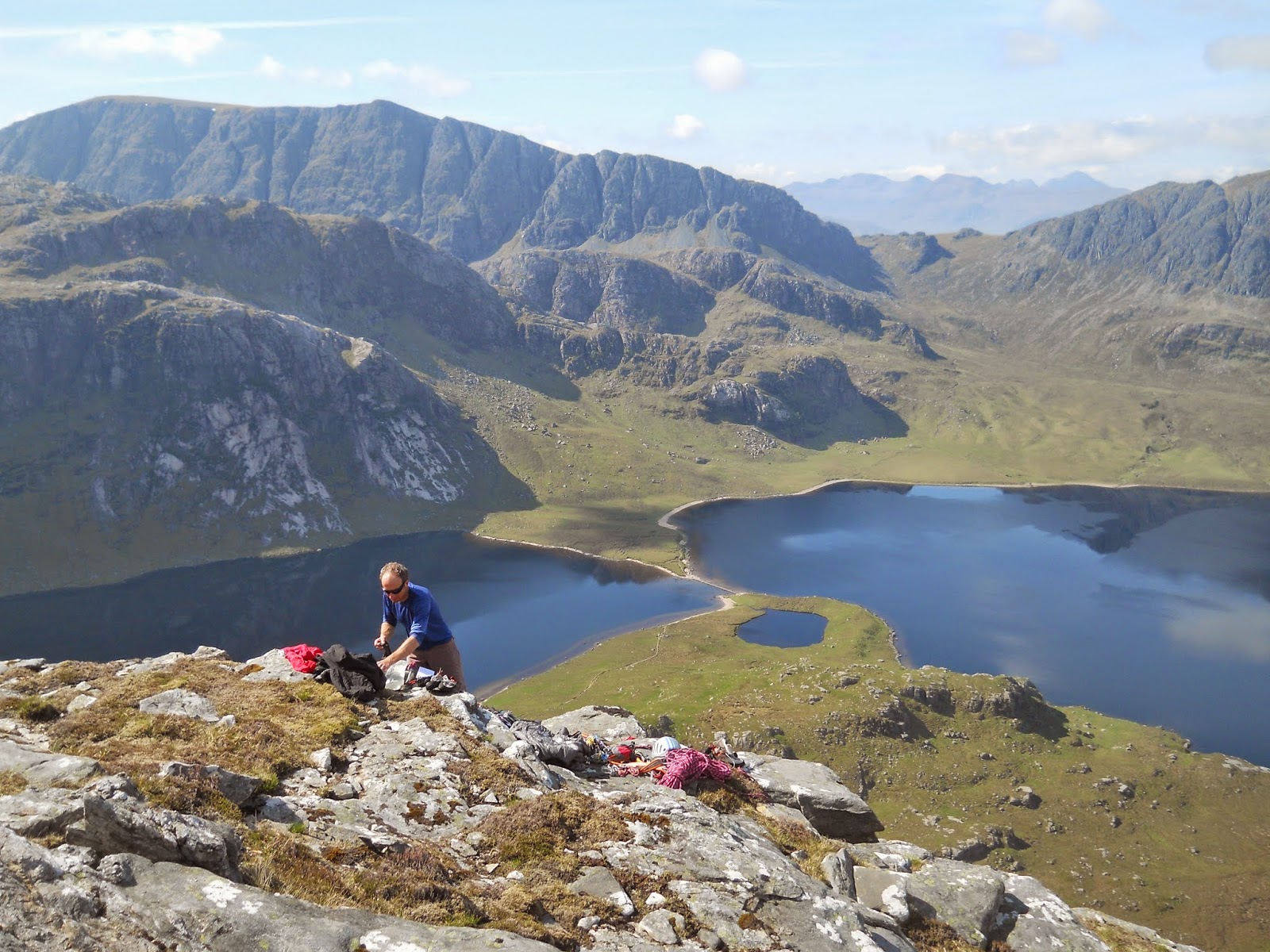 I started off explaining my potential FOMO about not going to the Islands.  Did I get it?  Of course not.  Would I have got it if I failed?  I would like to think not.  Even our first weekend in there, those three routes we did were gems.  Its so rare to get a the correct partner, weather and conditions for Carnmore.  All of a sudden the Islands are now the in place to be thanks to a UK Climbing article.  Reading the blogs, it sounded like everyone had a good time, good social scene (50 people at one point on one island) and lots of brilliant climbing.  I’m not sure I would have enjoyed it as much as I have done in previous years.

Murdo is supported by Mountain Boot Company and Rab.